Our October Garden Work Day gave us gorgeous weather. We had a lovely morning with lots of help from the children who joined. 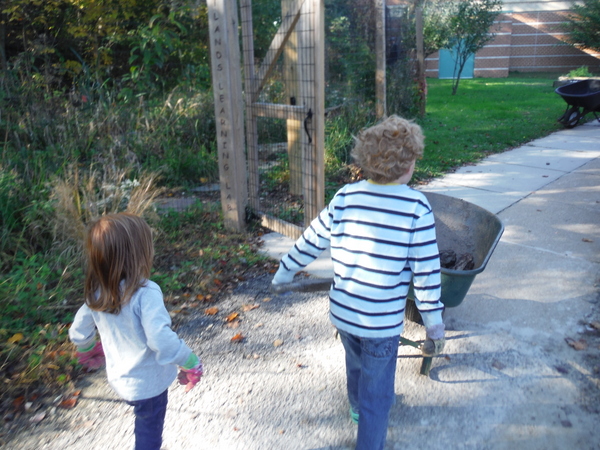 We focused on the beds in the K-1/Art/Gym area known as the Monticello Garden because its apple trees are from Thomas Jefferson stock.

We harvested lots of beautiful carrots from the two beds on the grass. 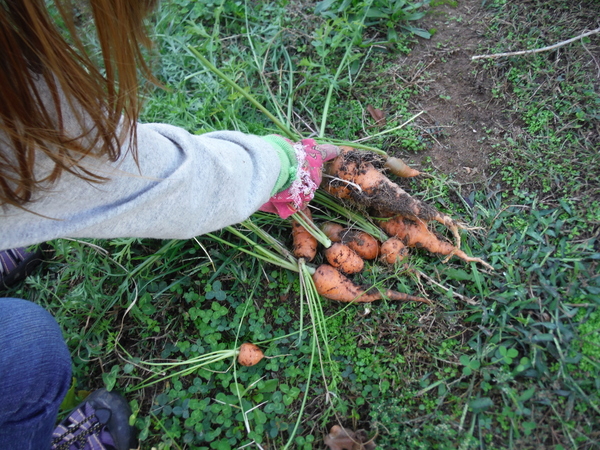 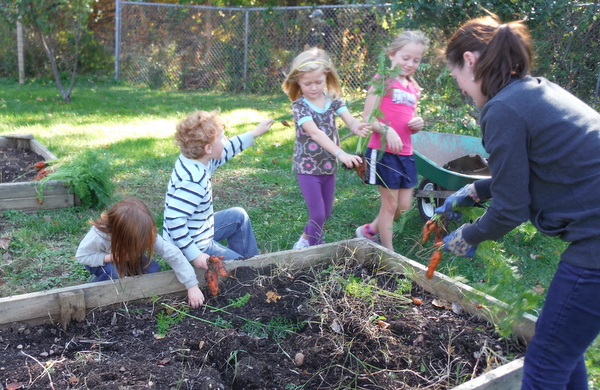 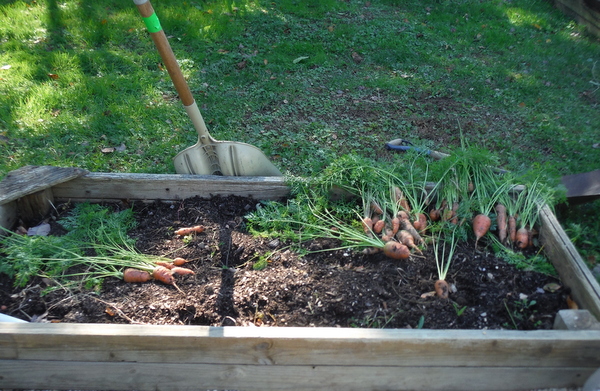 We focused our efforts on digging out the weeds and long-rooted grasses in one of these small beds, removed the soil, and moved the bed frame. 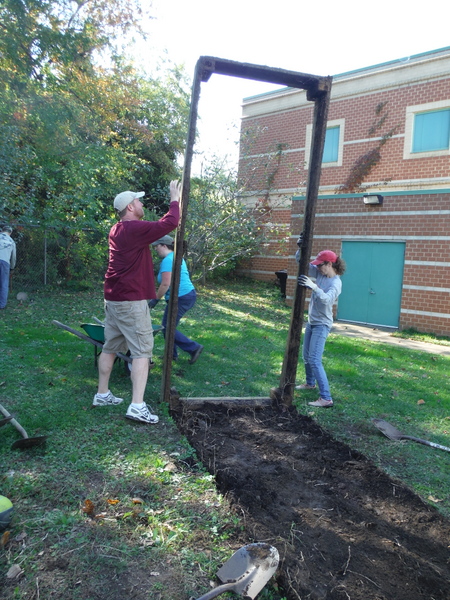 Then we covered the area with fabric in an effort to ensure that the weeds don’t return and replaced the bed. 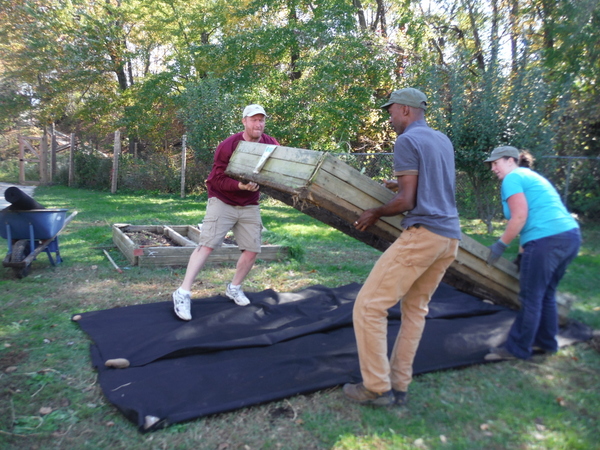 We took the logs we’d hauled and laid them into the bed. 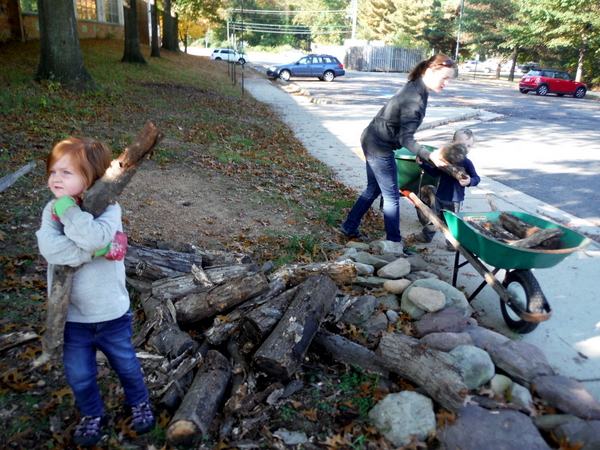 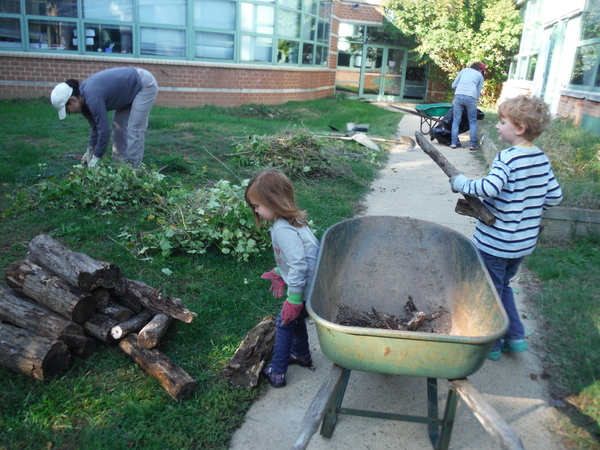 This was a smaller version of the hugelkultur beds that we built at September’s Garden Work Day when the APS Green Scene filmed our work in the courtyard and created this wonderful video.

We then mixed up peat moss, topsoil and manure to go on top of the logs and watered in between layers. 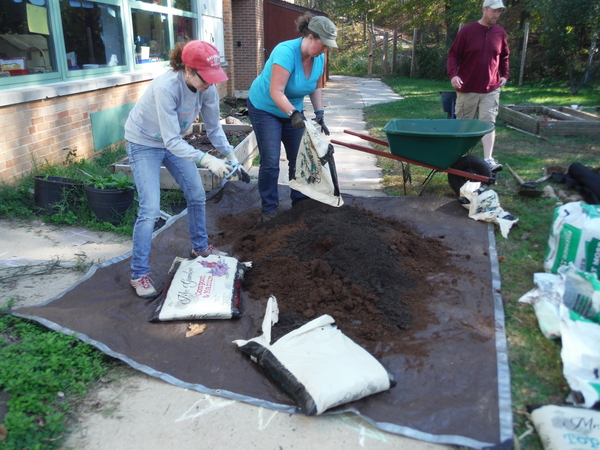 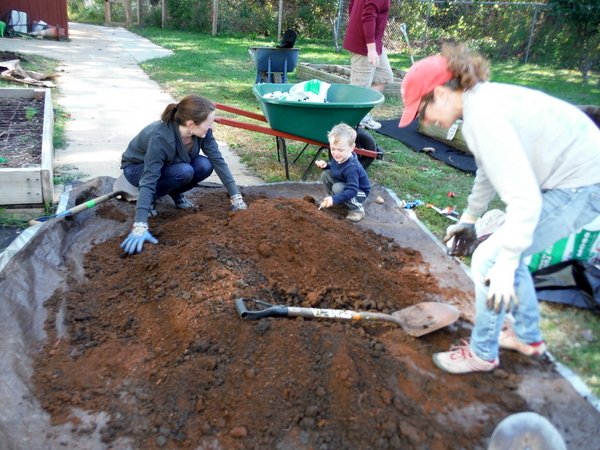 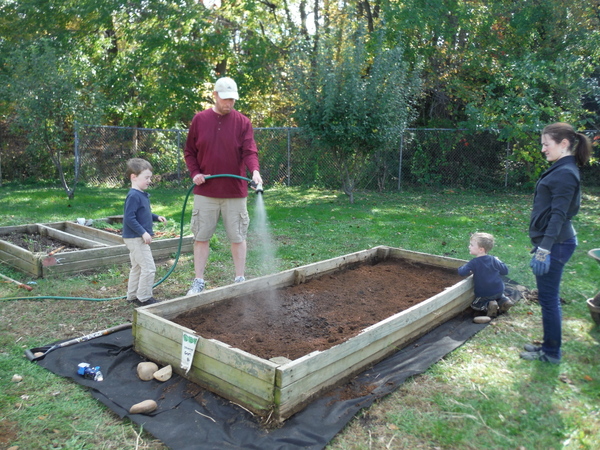 We also cleared the weeds from the beds next to the building, outside the K-1 classrooms. Some of the fennel was over six feet tall! 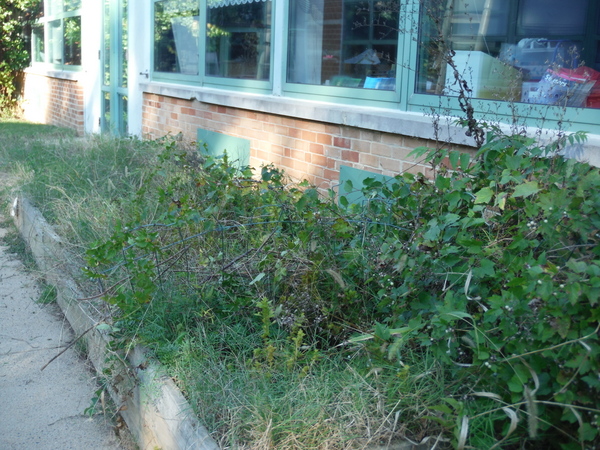 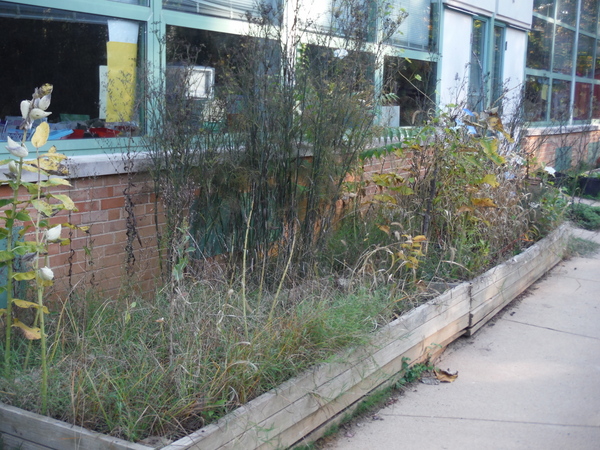 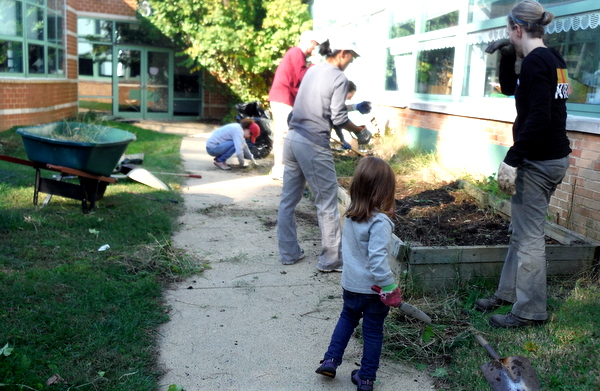 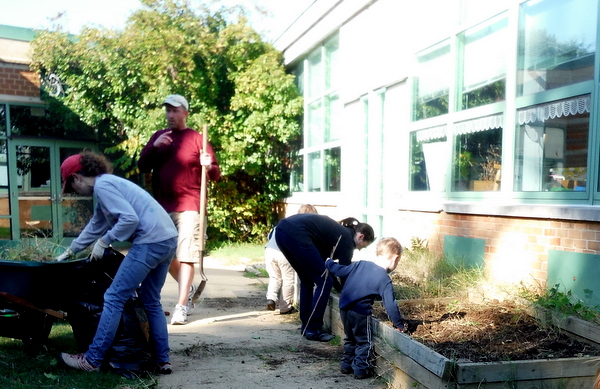 We didn’t have enough hands to dig out these beds next to the building like we did with the smaller bed on the grass. If this is to be done before spring, it will need to happen in the next few weeks before a potential freeze.

We were very lucky to have several Master Naturalists come out, thanks to the recruitment of retired teacher Pat Findikoglu. They cleared invasive Japanese honeysuckle and porcelainberry from the fence between the Wetlands Learning Lab and the gym and also helped clearing ivy and other invasive plants on the hill and in the Wetlands. 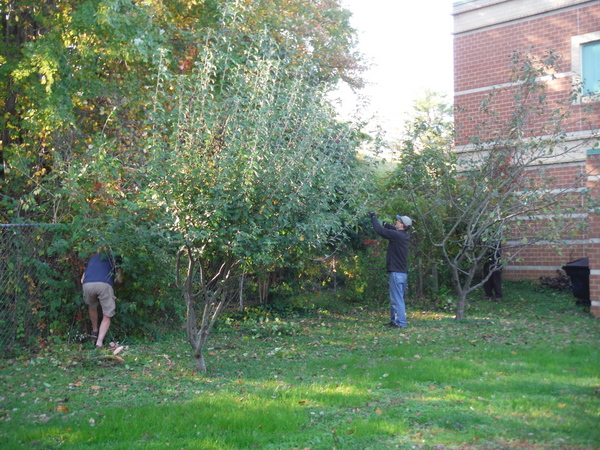 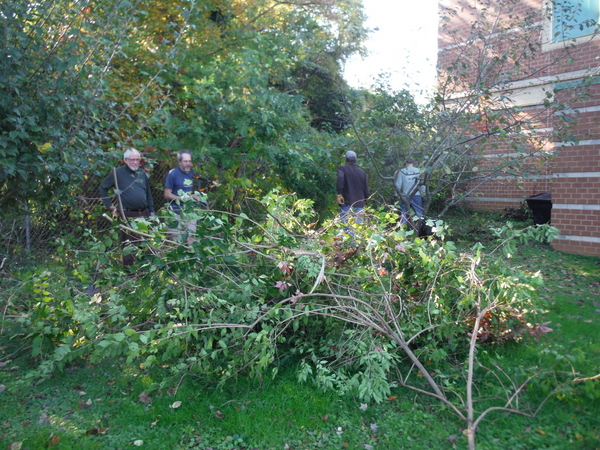 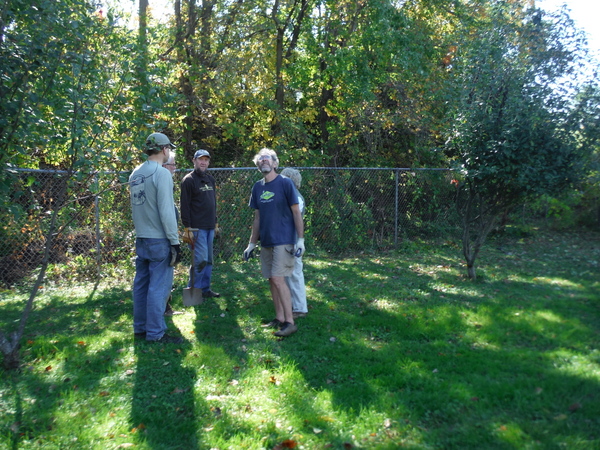 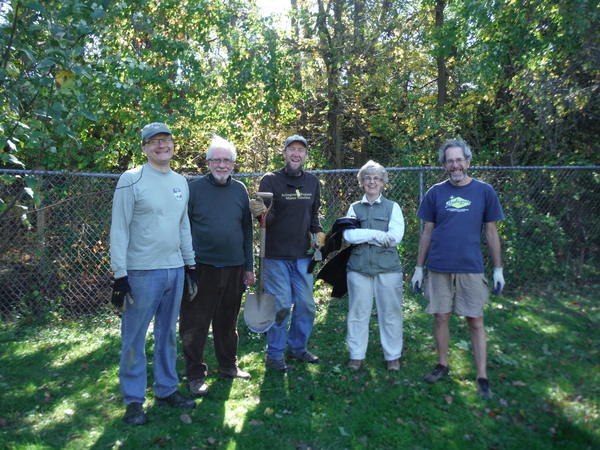 In the front, we removed liriope grass, which is thought to be ornamental and pretty but is on the list of non-native invasive plants in Arlington. Ms. Gantenbein cleared the bed along the front walk by the 4/5 hallway. In the courtyard, retired teacher Mr. Laumann cut down the huge (invasive) Japanese honeysuckle. Mr. Laumann had also hauled a full truckload of logs from a parent’s house to the school, as he had in September. VPI teacher Kay Stafford cleared the area in front of the relocatables near the sandbox. 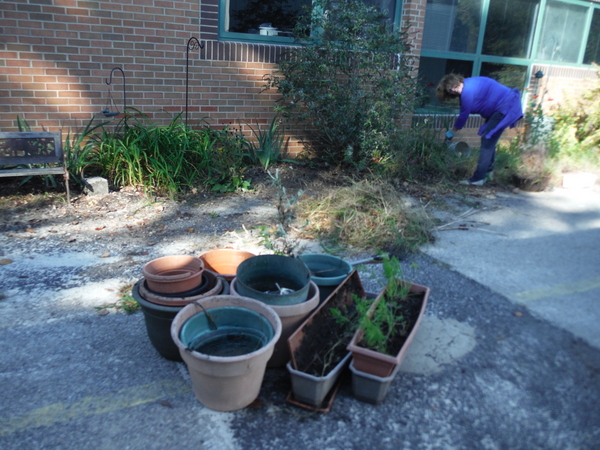 Much was accomplished with a small but determined crew that included garden docent Christy Przystawik and her family and the families of Ben & Will, Alexandra, Sean, Izac, Rachel, Sarah & Hetty, and Elliott & Annika as well as the Master Naturalists, Ms. Stafford, Mr. Laumann, Ms. Gantenbein and Ms. Findikoglu. Thanks to everyone for your hard work!

The next work day is Early Release Day Wednesday, October 22 right after school gets out at 12:26 until at 2:00 or so, and the last Saturday work day of the fall will be November 1 (9 a.m. to 1 p.m.). We look forward to having some more hands to enhance our Outdoor Classroom!